CHRIST IS IN OUR MIDST! HE WAS, IS, AND EVER SHALL BE!

St. Nicholas Serbian Orthodox Church of Johnstown, PA invites you to join us for Divine Liturgy each Sunday. Check the upcoming services section or our weekly bulletins for services times and dates.

St. Nicholas Serbian Orthodox Church has been a part of the Johnstown community since the original church was built in the Cambria City section of the city in 1906. Our church moved to its current site in October of 1964.

St. Nicholas Serbian Orthodox Church celebrated its Centennial Anniversary in 2006 and continues to serve people of the Greater Johnstown region.

Monthly Calendar & Upcoming Services
Daily Lives of the Saints - The Prologue from Ohrid
The Prologue of Ohrid: September 12th

A bishop, he left Italy for Bithynia in Asia during Diocietian's persecution, going to a place called Soreoi, where he brought many to the Christian faith and built them a church dedicated to the Archangel Michael. He stayed in the house of a devout Christian, Cornelius, whom Autonomus ordained priest and then consecrated bishop. Not far from the town of Soreoi was a place called Limnae, entirely inhabited by pagans. St Autonomus went to this place and quickly brought many to the light by the Gospel of Christ. This roused the pagans, and they hurried one day to the church of the Archangel Michael in Soreoi and, during divine service, slew Autonomus in the altar, killing also many other Christians in the church. In the time of the Emperor Constantine, a noble courtier, Severian, built a church over St Autonomus's grave. Two hundred years after his death, St Autonomus appeared to a soldier called John. This soldier dug up the saint's relics and found them to be completely uncorrupt, and many of the sick received healing from them. Thus God glorified him who glorified Him while in the body.

2. The Hieromartyr Cornutus, Bishop of Iconium.

Born in Nicomedia, in the village of Sarsalus, he was already very old when a persecution arose under Decius and Valerian. A torturer, Perinius, came to Nicomedia and began to seek out the Christians. They went out of the city and hid, but their aged bishop would not leave and presented himself to Perinius, proclaiming himself a Christian. The torturer bound him hand and foot and ordered that he be dragged through the town until his blood flowed. He gave his holy soul to God under the sword.

3. The Holy Martyr Julian, with his 40 companions.

They all suffered in about the year 300, being first tortured and then beheaded. In the face of death, St Julian prayed thus: 'To those who take some of my dust, grant, 0 Lord, the forgiveness of their sins and the subduing of their passions; may marauding birds never invade their fields, nor grasshoppers nor caterpillars, nor any other such dangerous or deadly thing; and do Thou receive my soul in peace.'

4. Our Holy Father Daniel of Thasos.

of St Joannicius the Great and was present when Joannicius visited the island of Thasos, where the people besought him to free them from an infestation of snakes. The saint prayed to God, and the snakes, in large numbers, rushed into the sea and were drowned.

They suffered for Christ the Lord in the time of Julian the Apostate at Myropolis in Phrygia. They were harshly tortured for destroying the statue of an idol, and burned on an iron grid until they gave their souls to God. While they were burning over the fire, these courageous men cried out mockingly to the torturer: 'Why not try our meat, to see if it's done!', and also, like the glorious archdeacon Laurence: 'Turn us over; we're done on this side!' Seeing and hearing the holy martyrs on the fire, the torturers were infinitely more confused and frightened than they were. 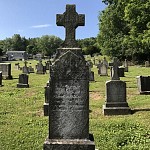 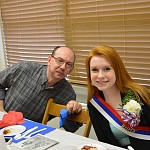